Lean Down on Waste

A couple of weeks ago I caught the tail end of a tv show presented by Professor Brian Cox ‘The Race for Space’ where he interviewed aerospace engineer Robert Zubrin about the benefits of setting up colonies on Mars.  Zubrin suggested that if we could “maximise the reach of human creativity” by exploring the trillions of planets in the world then we could tap into unlimited resources and it could mean an end to the concept that there was only so much to go around. 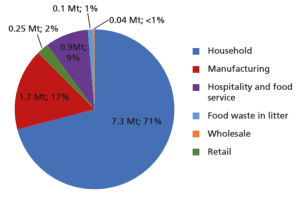 Whilst my heart gave a little leap of hope at hearing inequality issues discussed thoughtfully in mainstream media, it then fell back a way when I pondered on the resources we are burning through on poor old mother Earth.    Now, some environmental issues such as single use plastic and carbon emissions have made it into our everyday consciousness, but what about waste?

In a House of Commons report on Food Waste in England (HC 429, printed April 2017) it is shown that a staggering 10 million tonnes of food and drink are wasted each year in the UK. Picture 227,000 lorry shaped, and weighted figures of food and drink waste lined up on the motorway; that’s some tailback, and some picture of the world we live in.  Why so much waste I cry to myself in horror…where?  Then I see the below graphic from the Commons Report.  7.3 million tonnes right there in our very own household dustbins.

The first reason to be mortified at these numbers is that while a lot of us (me included) are busy throwing away our food, record numbers of people are being referred to foodbanks.  The Tressel Trust charity reported that during this last year 1.33 million people were supplied with emergency food supplies.  Alongside this, changes have been made to the free school dinners that are reported (Independent, Busby, Feb 2018) to have deprived up to a million children of a school meal.  And what about the people who don’t go to foodbanks, that perhaps aren’t aware of them?  That’s a lot of hungry people.  If this on its own doesn’t disturb you (though I’m sure it will) think about the cost of thrown away food on your weekly supermarket bill.  Last month Mark Carney, BOE director reported that the average household was £900 worse off than two years ago.  The time has never been riper to lean down on household waste.  The organisation Love Food Hate Waste (@LFHW_UK) has a website full of advice about eliminating food waste, including recipes and shopping tips.

It’s not just the question about what kind of society allows such stark equality differences it’s also the impact on the environment.  Not even mentioning the resources required to produce large amounts of food that ultimately end up as waste (a purported third of food produced globally) but the environmental cost of filling landfills and the consequent release of methane (more damaging than Co2) is enormous.  20% of the Co2 emissions in the UK are accounted for by food and drink waste (WRAP UK).

And then, there’s the restaurants.  I’ve read that a third of food ordered in restaurants gets left on the plates.  A third of the food served in those heaving restaurants finds its way into the bin.  What to do about that?  Order less, order mindfully is the thing that pops into my mind (as one who does tend to overorder more than occasionally) but what about taking the leftover food away?  I’m quite sure that most restaurants would be more than happy to wrap up the food they’ve spent time preparing from the menu they have spent effort devising.  Is there a stigma attached to requesting a take away?  Maybe, but with rising global temperature, rising food poverty and lower household income can we really be bothered to be sniffy about takeaways?

What about reaching up to challenge some of the bigger structures that are also contributing to the waste bill?  As you can see in the graphic above, manufacturing and retail put together take up the second largest slice of the pie.  In 2016 in France made it illegal for supermarkets to throw away unused quality food; a move that not only dealt directly with waste but also put the issue into the public consciousness by raising awareness.  Though there are critics to this approach it seems difficult to see how the drawbacks can be more harmful than the status quo.

If France has been able to implement the ban and subsequently reach the top position on the 2017 Food Sustainability Index isn’t it worth trying here?  Whilst some of the big supermarkets have taken voluntary steps to report on their waste and provide measures to reduce the bill (Tesco for instance) and the government have signed up to the Courtauld Commitment calling on both producers and consumers to reduce food and drink waste by 20% by 2025, we still have a long way to go.  The HoC report concludes that, disappointingly, a large number of manufacturers have not signed up to the commitment and calls for more ambitious waste targets to be implemented by the government.

The food charity Fareshare (@Fareshare_UK) have launched a #FeedPeopleFirst campaign aimed at increasing the amount of surplus food from producers that is sent onto charities or foodbanks. Currently only 5% of this surplus is redistributed in this way, with the remaining 95% being sent to landfill or to anaerobic digestion plants.  Fareshare reports that France’s food producers send approximately 100,000t of surplus food for redistribution to food charities.   Although their campaign focus is on a government fund to allow the logistical support and storage required to transfer surplus food to charities, and to put an end to the cash benefit of sending food to digestion plans, it does cite France as an example of positive waste management.  The legislation appears to be working in France, why not here?  So how do we move the conversation upwards? Write to your MP, contact Fareshare to get involved, start a petition such as Feed People First which generated a support base of 16,000 people, automatically entitling it to a response from the government.  When a petition reaches 100,000 it will be considered for debate in the House of Commons.  Imagine if we could gather all the people who’d been forced to use foodbanks last year – 1.3 million; it would certainly require a response from the government.  Our society is only as strong as its weakest member and with us consumers contributing to the largest portion of the waste pie it is up to us to lean down on our own waste and then start shouting at the government to follow suit.