Women in Engineering: Building the Future

Let me start by telling you a little bit about my family: my husband has been a Mechanical Engineer since his apprenticeship, I have a background in Mathematics & IT and we have two grown-up daughters.

Both daughters were encouraged from an early age to use technology (such as it was back then), to find out how things worked rather than taking them at face-value, to think problems through logically and, when the time came for secondary education, they both went to the local Science & Technology school, achieving excellent grades in their science and Maths GCSEs. 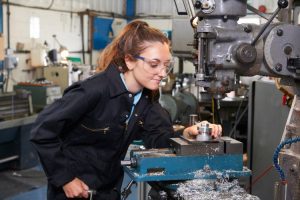 Both daughters then chose A-levels in the Humanities and have gone on to study humanity subjects at university.

So as we celebrate Women in Engineering today my very personal question is: where did I go wrong?

Of course that question is tongue-in-cheek, like all parents I want my daughters to be happy, which includes studying whatever subjects they are passionate about, and I’m immensely proud of both of them. But the fact that neither of them chose a science/technology-based career leads me to wonder if there was any more I, as a parent, could have done? Despite all our efforts and the school environment they were exposed to, neither of them have ever shown the slightest bit of interest in science or Maths.

Conversely, I myself was never actively encouraged (nor discouraged, to be fair) by my parents to follow a Mathematics based course of study, but I knew from an early age that it was what I wanted to do.

In our family at least, it appears that nature has won out over nurture.

The big problem with that statement, apart from the infinitesimally small, and therefore invalid, sample size, is that as parents we are only one of many influences on our children’s development, especially after they start to go to school. The media, their social interactions and the way the world in general communicates to girls versus boys all play a major part in the choices they make academically, which will inevitably influence the type of career they ultimately pursue.

But is this any reason to feel disheartened about the future of women in engineering? Absolutely not. The low percentage of women in STEM (Science, Technology, Engineering and Maths) is making the headlines precisely because people are starting to question and challenge the stereotypes that pervade society. Awareness events such as the UN’s Women and Girls in Science Day earlier this year and this week’s National Women in Engineering Day are helping to focus attention on the issue; schools and colleges are actively promoting engineering apprenticeships for girls. Parents play a crucial role in helping to ensure these efforts don’t go to waste.

At Continuous Improvement Projects I work with a group of like-minded women who have all spent the majority of their careers in male-dominated industries. We and our female friends and colleagues continually face challenges in business which could be overwhelming without a strong support network. Imagine yourself back at school without that support network and it’s not hard to realise why many girls give up science subjects. As parents we always support our children, but this particular issue calls for some creative thinking, a bespoke approach depending on the child.

You don’t have to have a background in STEM yourself to ensure that your children (let’s not forget that boys will benefit from this too) do not see science and technology as just for boys. You could try finding out how their school encourages girls to participate in science, actively seek out female role models or any other idea you have that may work for you and your children.

It can be daunting to tackle gender based issues – all you can do is your best with the tools you have available. Whatever you decide to try shouldn’t feel forced, after all the goal is not to manipulate girls into STEM subjects and careers against their will but to open their eyes to possibilities that they may not have been aware of, promote positive female role models, instil in them the confidence to be whatever, and whomever, they want to be.

The internet has plenty of resources available to help you understand how best to nurture an interest in science or technology, in particular the fantastic Women in STEM and the excellent WISE campaign. If you prefer your inspiration in print form, then there are plenty of books on this subject to motivate both girls and women alike.

To come back to my original question “where did I go wrong?”, the answer is, I believe, that I didn’t. I did my best. My daughters are well-rounded individuals who are excelling in their chosen fields; as a parent I couldn’t ask for more. But if I’d been aware of the influences and social barriers that girls may face when choosing subjects to study perhaps I would have carried out more research, tried some different strategies, spoken to other parents.

So if you have a daughter, grand-daughter, niece or any young female friend or relative, consider taking them to the Science Museum, buying them “Fantastically Great Women Who Changed the World” by Kate Pankhurst (descendent of Emmeline) and, most importantly, giving them the confidence to challenge the gender stereotyping they face in their everyday lives.