Which Way to Justice? 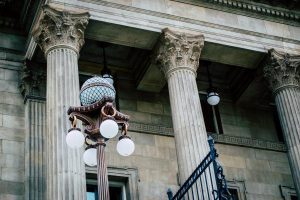 Justice is an ancient concept, spanning continents, times and cultures; the eternal search for what is fair, or just.  I believe that most of us at some stage have felt the sting of injustice; possibly as a child, maybe observed in the world around us.  My brushes with injustice have been light; someone takes credit for your work (okay, that didn’t feel so light) or you’re not given the same advantages as someone in your team at work, but at the time they still burn, and I like to think that I wouldn’t knowingly do the same thing to another.

In the UK we have a Ministry of Justice, whose vision, according to the government website is to deliver a world-class justice system that works for everyone in society.  After a quick look on their website I see that they have a new incentive for cracking down on cybercrime, excellent.  I wouldn’t like my paltry quantity of savings to be stolen by cyber-thieves, I imagine if you have a larger amount of online wealth accumulated you are even more relieved than I am.  And ladies, hold on tight, it is nearly against the law for a man to reach his hand under your skirt, take a picture and share it with the world.   Relief, but is it really 2018 and upskirting still not considered a punishable violation of a woman?  Is there a spectrum of focus for our justice system?  Is the system fit for the purpose of creating a just society for all, or even for a majority?

Is it fair that the financial directors of Carillion had been earning six figure salaries and opted not to hand back any of their bonus money when thousands of jobs were thrown into jeopardy due to its closure?  Is it just that despite investigations into insider trading within the firm the likelihood is that none of the directors will be held accountable for their debt?   Sub-contractors and small businesses, such as my very own, CI Projects will never recoup some of the money owed for services provided.  We managed to swallow the loss but who can say about the other 29,999 businesses who were also owed payment. Then there are the hospitals that they were contracted to be working on.  Who will get those built?  And my god could I go on right now.  Legal aid has been cut by 40%, meaning that access to justice for many of the poorer groups of society is out of reach.  70% of the parole services in the UK are now outsourced to private companies.  Private companies, the kind of profit-led, cost saving companies that can go bust like Carillion are now being used to administer parole services.  Nurses and teachers are frequenting foodbanks, charities are crowdfunding for public services and disabled communities have had their funding callously slashed while the Secretary of State for Work and Pensions sends tweets about eating luxury breakfasts.  If a team is only as strong as its weakest member then our society is performing pretty poorly right now.

So where do we go from here?  Where can we go for justice when the structures that control and govern our society are clearly so disinterested?  I have a few ideas.

Firstly, we start calling it out, it just takes a couple of people to start a movement.  Look at the Harvey Weinstein scandal.  He had been operating his casting couch tactics for decades and obviously considered himself in a position of unshakeable power.  The New York Times article breaking the Weinstein story in 2017 reported years of incidents, cover-ups and non-disclosure agreements.  Over this time police complaints had been made and Harvey Weinstein’s sexual proclivities towards young women in the film industry was apparently an open secret. Would he have given up his behaviour voluntarily?  Obviously not.  Would the police or authorities or those in the industry privy to the known secret suddenly become agents of change?  I don’t think so.  This is an example of a coordinated campaign between victims and a dedicated team of journalists to bring an issue to light that was not being addressed by the typical arbiters of justice or equality.  Within our collective voice lies the opportunity to challenge powerful people or organisations.

Or what about using some of our powers as consumers to fight for a more just society.  One of my favourite pieces of civil action has got to be the Montgomery Bus Boycott in 1955 spearheaded by Rosa Parks’s refusal to give up her seat for a white passenger, in a direct challenge to the racist segregation policies of Alabama at the time.  And after landing herself in jail, receiving death threats, losing her job and living a life of poverty Rosa Parks led the residents of Montgomery to boycott the busses for over a year, nearly bankrupting the bus company and leading the US Supreme court to intervene to end Alabama segregation.  Is your newspaper associated with the demonization of minority groups?  Do major department stores advertise in said newspapers?  Ditch them.  I’m a huge fan of boycott.  It’s your money, you’ve worked for it.  Do you want to spend it with a force or organisation that contributes to supporting injustice?  I don’t.  And when you actively choose to boycott you are often opening a conversation with someone who may not be aware of your cause and with better awareness comes more action.

And finally, if you have time or money why not support a group that is dedicated to helping bring justice to communities that are most in need of help?  Citizens Advice takes on volunteers to provide advice to those in need.  Having recently fought a £5k gas bill from a major provider I’ve been thinking a lot about people who don’t know the system, or don’t have the language facility to defend themselves.  A little bit of effort from those of us who are able can go a long way to individuals struggling to navigate through the system.

So, there we are, three suggestions to keep that rage at bay.  As I’m sure is the case with many people I’m angriest when I feel the most powerless and happiest when I feel like I have a sense of purpose and control over shaping the world I live in.   I don’t know many people who actively strive to make the planet a worse place, but they are out there and while the rest of us are turning away or living in denial, that space, where injustice breeds, continues to grow.