by Sarah Thomas | May 3, 2018 | Leadership, Learning and Development, Positive Energy 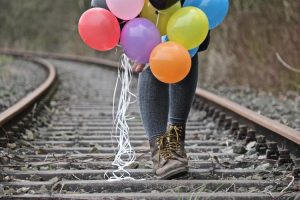 Out of a few different existences (corporate, student, political, traveller etc.) my favourite realm is undoubtedly the creative one and currently, that energy is focused on screenwriting. I’ve written one full film script and am in the middle of two other projects. It’s a tough one to break, given the money involved in production and the number of writers with similar aspirations but I am a hopeless optimist and believe that I just need to push on.  Recently I entered my script into a European film award and was delighted to make the official selection (and subsequently an award…but that came later)  Hoorah, go me!  I allowed myself a whole day of internal gloating and posted my good news on Facebook.  Okay, so it wasn’t that internal but a day, still.  I had a lovely outpouring of congratulations from my friends and then, the negative email.  A friend, who does have a general predisposition towards the powerless of the individual to achieve true greatness, wrote to me to tell me that she had looked up the award and couldn’t find any information about the judges and had I considered that it was a fake festival? POP, my day of celebration, brutally cut short, seven hours early and with this my balloon came fluttering lifelessly down to the ground, albeit temporarily.

Perhaps she believed that she was trying to help, rather than to stomp down any notion I might get about making it.  I like to maintain the theory that everybody who is negative about my dreams is wrong and that gives me some momentum.  I had a tutor once tell me that I would struggle to get any work on a London stage because I was white and middle class (PLEASE!  Have you seen the theatre demographic)?  Perhaps he also thought that he was being helpful (he was also white and middle class).  I did get my work on the stage, maybe, just to disprove him.  I’ve also been told that certain concepts of mine can’t work, not because there were impossibilities within my reckoning but because the critic couldn’t see the idea clearly.  Following this I’ve developed a simple rule about being told what I cannot do.  If one person tells me this, it is probably a good idea, if two different people tell me that something of mine won’t work then it is undoubtedly something I MUST do.

In another of my lives, I was recently part of an initiative in my workplace to come up with a series of ideas based on the engineering and management skills that we held as a company.  This ambitious but highly possible plan was to take these ideas (and the floor was open to everybody) and collectively develop them into a product with a view to entering an industry that we (company) had never worked in before.  The fruits seemed boundless; a new frontier!  For someone like me, who loves a challenge and the opportunity to participate in the process of developing an idea into a tangible thing, I was absolutely chomping at the bit. Others, have more grounded approaches, or should I say grounding?

So, In one of the workshops my colleague stands up and gives a fantastic talk about his business model theories. Excitement in the room is growing, a series of positive comments are made and already a few streams of application are emerging.  Then, someone, a company leader in fact, interjected to say that he had seen approaches like this before, it was nothing new and they already had their own methodology so why the need to change?  POP.  The temperature in the room dropped a good five degrees and the poor presenter was visibly discouraged, as were the rest of us.  Was it this leader’s intention to have a constructive conversation about the challenges of this new approach, or was it just to shut down this person, who wasn’t in the management hierarchy?  Who can say?

So, there we are, two examples of negative forces; one in the personal space and one in the workplace.  My personal example is just illustrative of the fact that not everyone is onside with you in achieving your dreams; there are thousands of friends, strangers and foes out there who would like to help to convince you that you should stay in your box.  They are in theirs and you should therefore confine your life to their set of rules.  Ahem!  I don’t think so.  I think it’s important to surround yourself with enablers, with people who have different dreams but believe that the more of us that are doing what we love results in a happier society; success is not a finite quantity. But it’s equally important to experience the negativity towards you and use it constructively to distinguish yourself as someone who takes on big challenges and won’t let a few discouraging words, or friends get in the way.

The second example, the workplace, is a tough one.  When your management is blocking your positivity, your access to new ideas and approaches what can you do? After the workshop I made an effort to talk with the presenter and ask a few more questions, engage with his ideas and you know what, I could see the flicker back in his eye.  In this space I was the lowest in the hierarchical chain.  I’d rally the troops, gather their presentations, book the meeting rooms and try and maintain some momentum.  Sadly, my role didn’t grow from this during my time at the company, but a more important role emerged: an enabler and that is something that we can all do.  Listen, engage and believe; these are the some of the core qualities that we can lend our thought pioneering contemporaries and it doesn’t make a difference which corporate rung you are on to offer this support.  Management ceilings change from one workplace to the next, but we can all build up our broad shoulders and take our can-do attitude with us where we go.  Eventually one of those ceilings will be lifted so lets keep an eye out for opportunities to navigate together through the negativity that seeks to hold us back in life and work.   Pick up your balloons and off we go.