Lean Six Sigma and the Genius of Steve Jobs 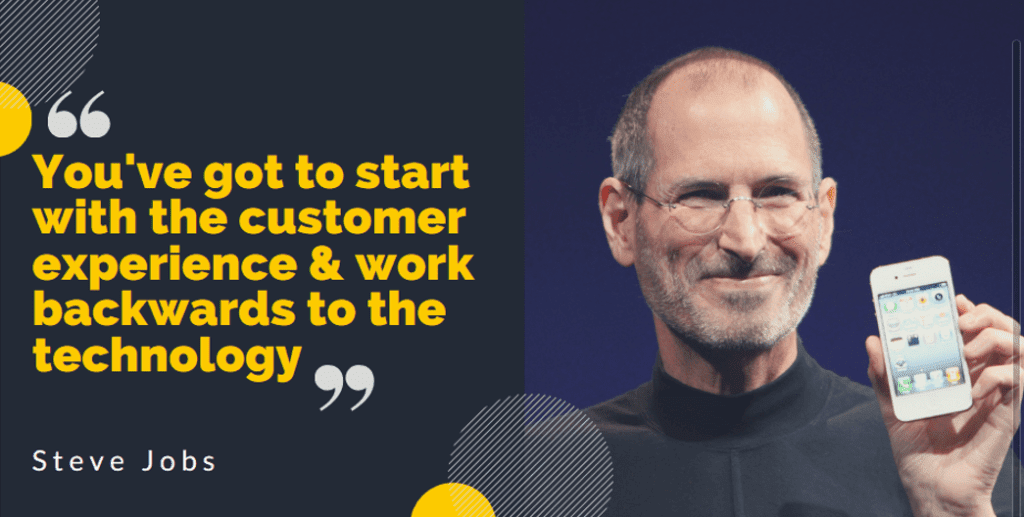 Love him or hate him, as many do, it is hard to deny the impact Steve Jobs had on the Apple customer experience for millions of people worldwide. His biographer Walter Isaacson described his tenure as a saga of ‘entrepreneurial creation myth writ large,’ and his legacy was not just in product development but also innovative management practices. Though he led enormous teams in the specific field of technology, many of his philosophies on innovation and problem-solving have strong parallels with the Lean Six Sigma methodology.

Our founder, Kiran, recently presented at the ITEM Business and Technology conference on ‘Harnessing the Creative Genius in your Organisation’ where she explored the Lean Six Sigma guiding principles in comparison with the values exhibited by the greatest creative genius’ of all time, including Jobs. There is a striking similarity. For this month’s blog we look at a collection of Jobs quotes and show how they tie in with some of core Lean Six Sigma foundations.

To start with, the Jobs vision to “Stand at the intersection of humanities and science”, regarding innovation is one shared by us. No change project is successful without linking the human aspects of organisational change with the scientific elements of a new system or process implementation. We were once asked by our client to identify why a new suite of operational processes, rolled out 6 months previously, had a low level of adoption. Once we began to investigate it became apparent that whilst there was awareness of the new processes, people did not have sufficient knowledge on how to apply them and did not understand why the changes were enforced. The business believed that they had provided satisfactory training by delivering a 1-hour webinar and circulating email instructions; they failed to understand the human aspects. Whilst it took longer to subsequently provide face-to-face training, we rapidly saw the rate of adoption increase. Why? Because we used the training sessions to demonstrate the waste in current practices, we used data to back this up, we explored how the changes would impact them beneficially to help raise their desire to change, and we gave them an opportunity to ‘try it themselves’ through a simulation as we truly believe in the ‘learn by doing’ approach. These are all characteristics of the Lean Six Sigma approach which links humanities and science.

Jobs believed that, “You’ve got to start with the customer experience and work backwards to the technology”, which is one of Lean Six Sigma’s core principles. As a case study, when a regular client appointed us to manage the delivery of a new system that they claimed would improve billing and revenue generation alarm bells started ringing.  Surely, it’s people, not a system that can improve this?  After re-aligning the focus from technology, back to the customer they realised that the emphasis and size of the scope were all wrong.  They then re-focussed onto the customer’s challenges, strengths and requirements and re-designed the processes specifically to meet those needs. The implementation of this system was revolutionary for this business and the project was an enormous success. Since then our client have transformed the way in which they do billing.

Another of his mantra’s was, “Deciding what not to do is as important as deciding what to do.”  This feeds directly into one of the Lean Six Sigma: Laws of the Lean; that 80% of your problems lie in just 20% of your activities. We were once tasked with the job of improving the productivity of our client’s mobile engineering workforce. The brief was to improve productivity of over 100 engineers. The client’s suggestion was to think-up strategies to combat the entire workforce, ‘painting all engineers with the same brush’. However, after analysis into the data and working practices to fully understand the problem what became clear very quickly was that the productivity of certain trades was worse than others. We undertook a pareto analysis and found that circa 80% of the problems lied in just 20% of the workforce and after an integrity analysis on the data found that those engineers appearing to be very productive had in fact very little variability in their data, suggesting that the way in which they were recording their labour time was in fact inaccurate (e.g. they would book 1 hour to every maintenance job – could this be true?). Using this data, we began to focus our efforts on improving reporting integrity in certain areas, as well as the productivity amongst certain trades to understand the underlying root causes. We improved the overall productivity for this client from a benchmark of 27% to 72% and increased confidence in the credibility of the data. This would not have been achieved had we have not focussed on the right areas and discarded others.

“The people who are crazy enough to think they can change the world are the ones who do” Is Apple’s “Think Different” commercial from 1997.  Less about Six Sigma but totally in line with our beliefs, a lot of CI Projects’ success has come from believing we can make a change. If we didn’t have that self-belief, we would just be going to work to fill a space rather than to drive continuous improvements. Combining confidence and expertise with a promise to only operate in the spaces where we know we can provide business solutions, we do see ourselves as crazy enough to know we can change the business world.

We could go on, there are plenty of similarities in philosophies between Lean Six Sigma and Steve Jobs, products before profit, strive for continuous improvement and always simplify but suffice to say that when it comes to business, technology and innovation, any organisation could do much worse than to hold him up as a role model.  For further information on Lean Six Sigma or how our business solutions could help your organisation prosper please contact us info@ciprojectsltd.co.uk.